The tablet is definitely the most popular and fashionable favorite of the post-80s and 90s. It integrates mobile commerce, mobile communication and mobile entertainment. It has handwriting recognition and wireless network communication functions. It is called the terminator of notebook computers. The LED micro projector is a stylish presentation device that appears after the traditional light source projector to change the single use of the projector. It can be used for business presentations and entertainment presentations. 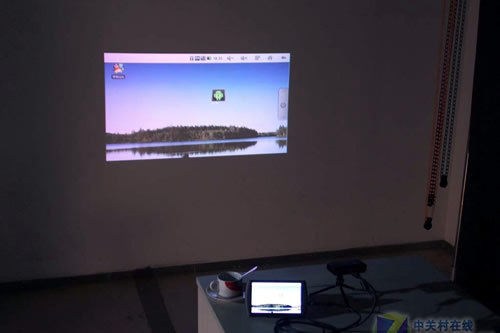 Today we got the new tablet PC from Austrian QiPad Qipai to see what application experience the connection with LED mini projector can bring to users.

Speaking of tablet computers, I believe most users think of the Apple iPad. We have already had related applications before, which can only demonstrate videos, pictures and PPT files, and only after opening the files mentioned above will be projected. In addition, the connection also requires a dedicated Apple iPad adapter cable, and the price is more expensive.

Today we tried the Aoser QiPad device tablet. Although it is not as smooth as the iPad, it also has its own advantages. Users can apply commonly used office software, can access the Internet, watch movies and magazines, play games, etc. In fact, the most important point is that it can be used for good interactive applications with LED micro projectors. Not only is it very convenient to connect, but also very simple in application.

The connection setting is simple and convenient. AoVision QiPad Tablet PC has designed a mini-HDMI interface, which is also designed by the LED micro projector Optoma PK301. We can easily buy this connection or adapter from the market. The connection between this tablet and the LED mini projector is very simple, the details are as follows:

The first step of connection: open the settings menu of the tablet;

Step 2: Find the sound and display options in the menu. After entering this item, first set the HDMI Setting to the corresponding resolution;

Step 3: Open the Output Select option, select HDMI and save. At this time, after pressing the search signal button of the projector, you can see the projection screen in 10 seconds. connection succeeded.

After the Aosq QiPad tablet is connected to the LED mini projector Optoma PK301, the projection screen is displayed synchronously with the content of the tablet screen. Next, let's take a look at what applications can be brought to us after a successful connection.

Everyone is very busy at work, that is, they can rest for half an hour after lunch, and a few hours after returning home from work at night. We can relax ourselves during the break and play some relaxing mini-games. The racing game built into the Tablet PC of the Aoqi Qipad School is controlled by swinging the body, which is similar to the somatosensory game.

The large picture effect brought by the mini-projector Optoma PK301 allows users to play games without having to focus on the small screen of the tablet, and entertainment is more relaxed and natural.

The tablet itself can watch movies, but if multiple people want to watch them together, an external monitor may be needed. The LED mini projector body is small and portable, the presentation is also very simple, simple connection, projection of large-screen video.

When watching a movie, only the LED micro-projector will display the screen, and the tablet is now the control device, which can adjust the presentation progress of the video and other content.

The application of LED mini projectors is everywhere, and it also brings more entertainment applications to users.

When sharing travel photos with friends, use the LED mini projector to project the photos stored on the tablet. You can comment on the style of the current photo in time, or introduce the scene of the photo and the main points of the view in the photo.

All tablet computers can be connected to the Internet wirelessly. During the group discussion, when sharing news highlights or other content seen when browsing the website with the participants, the demonstration screen is enlarged with a micro projector, and the meeting is simple and efficient.

Three, five people simple meeting, a tablet computer connected to the LED micro projector can be achieved, and can efficiently and simply present the important content of the meeting.

Apple iPad only supports the presentation of PPT business files after connecting to the projector, and after the connection between the Austrian QiPad device tablet and the LED micro projector Optoma PK301, we can successfully demonstrate WORD, EXCEL, PPT, TXT text files and PDF files. , The compatibility is stronger.

Because the tablet we use supports inserting a memory card, we successfully demonstrated the TXT file in the memory card through the projector.

Office files are used the most in business meetings. We often use EXCEL data sheets, WORD files, and PPT slides. AoQ QiPad Tablet PC can be successfully demonstrated when connected to a LED micro projector.

Summary: After the performance of the product is stable, more and more users begin to pursue application compatibility. A product, in addition to its own functional features, strong compatibility will make users more concerned and favored.